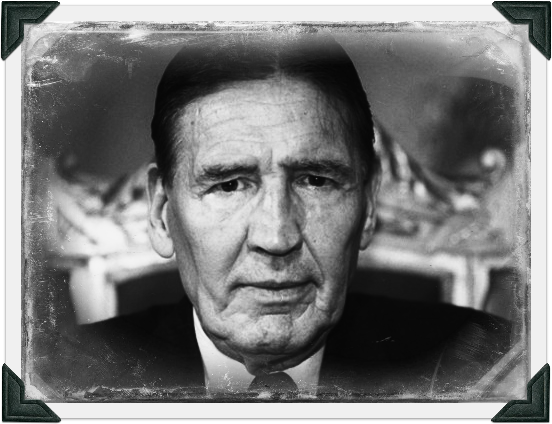 Frank Davidson “Frankie” Fraser, better known as “Mad” Frankie Fraser was born on Cornwall Road in Waterloo, London, he grew up in poverty and was the youngest of five children, Fraser and his sister Eva, whom he was close too, turned to crime at the age of 10, on several occasions during World War 2, Fraser would escape his barracks and deserting many a times.

During the War, it was quite easy to get into criminal activities due to the lack of Police due to many fighting in the military, due to their being many blackouts and due to rationing, it was easy for him to break into people’s houses when the occupants were hiding out in the air-raid shelters.

In 1941, he was caught breaking into a hosiery store in Waterloo and was sent to Borstal, following that he was then given a 15 month sentence at HM prison Handsworth for shop breaking, due to the amount of criminal activities during the war that he endured he later joked within a television interview many years later that he would never forgive the Germans for surrendering.

When the war ended Fraser was involved in a smash-and-grab raid on a jeweller, for which he received a two-year prison sentence. It was during this sentence that he was first certified insane and was sent to Cane Hill Hospital before being released in 1949.

During the 1950s his main occupation was as bodyguard to well-known gangster Billy Hill. He took part in more bank robberies and spent more time in prison. He was again certified insane while and this time sent to the infamous Broad-moor Hospital. Afraid of being heavily medicated for bad behaviour, Fraser stayed out of trouble and was released in 1955.

In 1956 the British mobster Jack Spot and wife Rita were attacked, by Fraser under Hill’s orders, Bobby Warren and at least half a dozen other men helped Fraser with the attack, they were caught and Fraser and Warren were given seven years.

In 1960, he met the Richardson brothers, Eddie and Charlie, rivals to The Kray Twins, according to Fraser it was the two Richardson brothers that prevented him from going to jail for the great train robbery, by bribing a policeman.

In 1966 Fraser was charged with the murder of Richard Hart who was shot at Mr Smiths’ club in Catford, while other members including Jimmy Moody were charged with group fighting disturbing the peace, however later a witness changed their testimony and the charges were eventually dropped, Fraser however still received a five-year sentence for the same charge as Moody. He has always maintained that, while he fought with Hart, he did not shoot him.

In all the 42 years Fraser served in over 20 different prisons without the whole of the country, often his stay in prison resulted in some kind of violence, rioting, fighting fellow prisoners and officers, and even governors, involvement in such matters resulted in his sentences being extended. Within Strangeways in Manchester, Fraser claimed he had problems with his feet due to another prisoners spilling boiling water over them, he was therefore excused wearing the common boots prisoners were expected to wear and was allowed to wear slippers, he was released from prison in 1985.

Somewhat a celebrity lifestyle followed Frankie, he was seen on many British TV shows such as ‘Shooting Stars’ and ‘Brass Eye’ even appearing in movies such as ‘Hard Men’ and as a forerunner on ‘Lock, Stock and Three Smoking Barrels’, he gave gangland tours around London, highlighting famous criminal hangouts such as Blind Beggar Pub, he was an avid football fan, supporting Arsenal FC.

In 1991, Fraser was to be the target of a murder attempt, he was shot at point blank range, resulting in the loss of part of his mouth, he refused to discuss the shooting with police, and remained silent.

Fraser was a resident at a sheltered accommodation home in Peckham. According to Eddie Richardson, Fraser had Alzheimers for the last three years of his life.

In June 2013 the 89 year-old Fraser keeping up his habitual ways and was served with an anti-social behavior order by police after a row with another resident.

On 21 November 2014 he fell critically ill during leg surgery at a local hospital and was placed into an induced coma. On 26 November 2014 Fraser died aged 90 after his family made the decision to turn off his life-support machine.

Former gangland boss Eddie Richardson and Great Train robber Bobby Welch, who was in a wheelchair, were among those paying their respects at his funeral, the song ‘That’s Life’ by Frank Sinatra was played as the coffin was lowered for cremation.

“There is no Mafia”, said FBI’s Director J. Edgar Hoover

The Mafia Quiz of the Year (100 Questions)