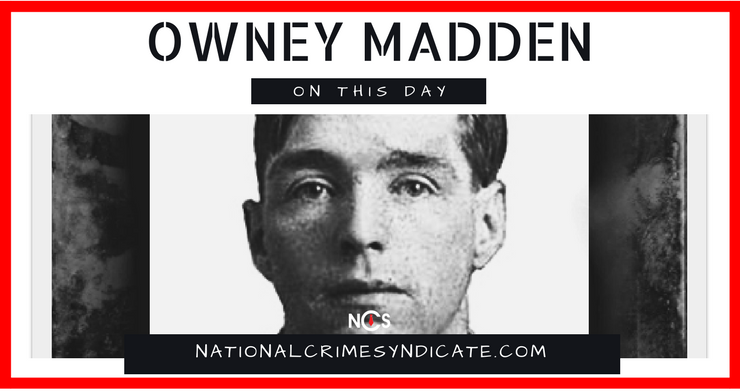 Owen Vincent Madden was born in Leeds, England on December 18th 1891. Due to the fact the family wanted work, they moved first to Wigan before moving on to Liverpool, his father’s intentions were to finally move the family towards the United States, this was fulfilled in 1901.

However tragedy struck the family, and Owney’s father died before he could complete his ambition. The family moved to Manhattan before finding a new home in New York’s long-established Irish community, Hell’s Kitchen, which was to shape Madden’s life permanently, giving him a reliable and loyal network among the thousands of other Irish emigrant families who had made New York their home.

Madden joined the Gopher Gang later that year, his associates described Madden as “that banty little rooster from hell”, and he quickly became a fierce fighter, known for his skill with a lead pipe and his gun in fights with his rivals.

He eventually gained the nickname “the Killer” after gunning down an Italian gang member in the streets, after which he shouted:

Despite the public nature of the murder, no witnesses came forward linking Madden to the crime.

By 1910, at 18, Madden had become a prominent member of the Gophers and was suspected in the deaths of five rival gang members, his reputation gained him leadership, and he was earning in that era as much as $200 a day from the Gophers’ criminal activities, such as racketeering.

Madden enjoyed an opulent lifestyle, and he was often accompanied by several women. However, he became known for his violent jealousy when he shot and killed a store clerk, who had asked out one of Madden’s girls, the clerk survived the attack and Madden was arrested, but shortly after the clerk died from his wounds. Although the attack had several witnesses, the case had to be dismissed as no witnesses came forward.

Over the next three years, the Gophers reached the height of their power as Madden recruited various gunmen into the gang. As Madden began encroaching into rivals’ territory, particularly the Hudson Dusters, Madden found himself ambushed and shot eleven times outside a dance hall on November 6th 1912. Incredibly, he survived the attack but refused to identify his attackers to the police, he said:

“Nothing doing. The boys’ll get ’em. It’s nobody’s business but mine who put these slugs in me!”

After his release, several of the Dusters had been killed.

In 1914, Madden became involved in a dispute with a main member of the Dusters Little Patsy Doyle over a woman, Doyle informed police of Madden’s operations. Then after Doyle’s assault on one of Madden’s close friends, he arranged for Doyles murder. Madden asked Doyle to meet him, supposedly in order to reconcile.

As Doyle arrived on November 28, 1914, Madden ambushed Doyle and killed him. Madden was eventually sentenced to 20 years at Sing Sing Prison but was released on parole in 1923 after serving 9 years of his sentence. After getting out of jail, times had changed, by now The Gopher gang had broken up, and many members of his own faction were either in Sing Sing or working for bootlegging gangs. He was given a job by an old friend Larry Fay, he was not the most physically imposing of gangsters and he needed Madden’s muscle to help establish the taxi business he had set up from profits he had made, Later Fay also became involved in New York’s milk trade, attempting to turn its delivery into a racket.

Owney Madden learned quickly and soon moved on to form his own organization. He saw prohibition as too good an opportunity to pass up, and soon became heavily involved in bootlegging in the Hells Kitchen area.

In 1924 the Madden gang began high jacking liquor shipments belonging to Big Bill Dwyer, however rather than go to war over the issue, Dwyer took Madden on as his partner when Dwyer decided he needed to beef up the enforcement side of his own operations.

In 1932, Madden was also involved in the murder of Vincent ‘Mad Dog’ Coll, he had been extorting money from several mobsters, including Madden. He eventually left Manhattan in 1935 and settled in Hot Springs, Arkansas, there he became involved in criminal activities and due to the corrupt city government and police force, it was a haven for criminal activities, and Madden took up illegal gambling.