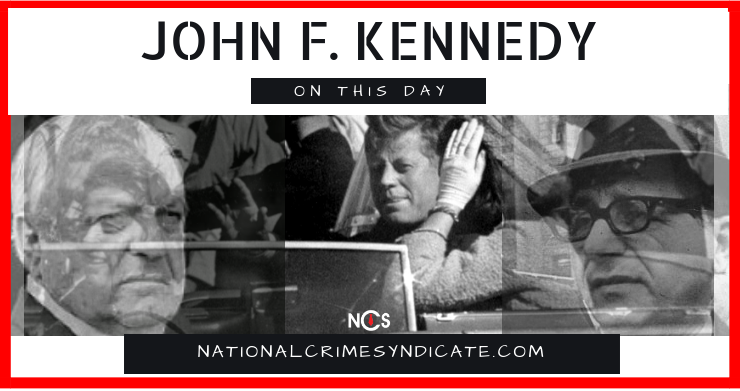 On 22 November 1963, President John F. Kennedy was a passenger in a motorcade through the centre of Dallas, Texas. Nellie Connally, then the First Lady of Texas, turned around to President Kennedy and said:

Those were the last words ever spoken by John F. Kennedy. Soon after the President was assassinated. 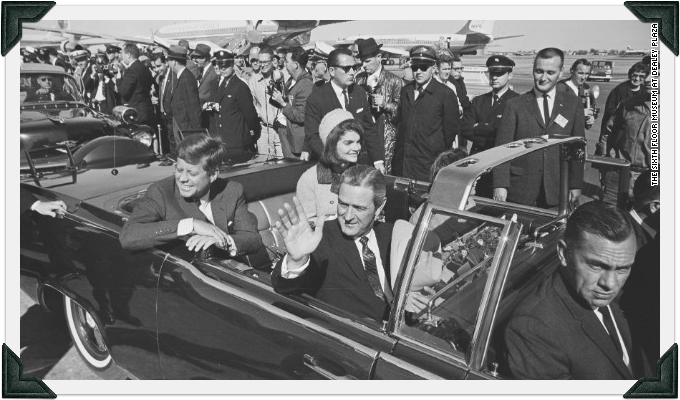 At about 12:30pm, the motorcade was in Dealey Plaza, just outside the down town area, when several gunshots were fired, altogether three people were injured.

President Kennedy was wounded in the back and the throat, and, fatally, in the head, The governor of Texas, John Connally, who was sitting directly in front of Kennedy, sustained three wounds and bystander, James Tague, received a slight cut on the cheek from the impact of a bullet to the concrete curb near his feet.

Much of the evidence in the assassination is inconclusive and open to a variety of interpretations. Only two are realistic solutions, both of which revolve around the role of Lee Harvey Oswald, either Oswald killed Kennedy, with or without associates or he was set up in advance to take the blame.

Rumours quickly spread about Jack Ruby’s connections to organised crime in Dallas and Chicago, his history of gun–smuggling, his links to the Dallas police, and his stalking of Oswald in the two days before he shot him dead.

Firstly Sam Giancana was the first connection JFK had to the Mafia, Giancana was the former head of the Chicago crime syndicate, and shared things in common with the president, he had long term ties with the Kennedy clan, dating back to JFK’s father Joseph P. Kennedy who was involved with Giancana in the bootlegging business during Prohibition. Additionally, Gianciana was an associate of singer Frank Sinatra, a close Kennedy friend.

In 2009, Tina Sinatra, daughter of Frank Sinatra stated that Sinatra allegedly asked Giancana to use mob muscle to pressure local union members to vote for JFK. Giancana and Kennedy also shared a mistress, with whom they were involved with at different times, Kennedy first, then Giancana.

The mob certainly had potential motives to be involved in JFK’s murder. Several mob leaders were upset that Kennedy had failed to overthrow Cuban leader Fidal Castro, who had closed down their casinos in Havana after he took power in 1959. The President’s brother, Attorney General Robert F. Kennedy, further had aroused their animosity by launching a high-profile probe of organized crime and aggressively pursued Teamsters Union leader Jimmy Hoffa for alleged corruption and ties to the Mafia.

Jack Ruby undoubtedly had a connection with the Mafia, firstly he was a runner for Al Capone in the late 1920s before he moved to Dallas in 1947, Ruby had also known Chicago mobster Sam Giancana and Joseph Campisi and had been seen with them on many occasions he also owned several nightclubs, one in down town Dallas that it was believed Oswald visited.

Furthermore, telephone records and other documents showed extensive contacts between Ruby and underworld figures from across the country in the months before the assassination.


A day before Kennedy was assassinated, Ruby went to Joe Campisi’s restaurant. At the time of the Kennedy assassination, Ruby was close enough to the Campisis to ask them to come see him after he was arrested for shooting Lee Oswald. Joe Campisi and his wife visited with Jack Ruby in jail for ten minutes on November 30, 1963.

An Oysterman Gets Shucked