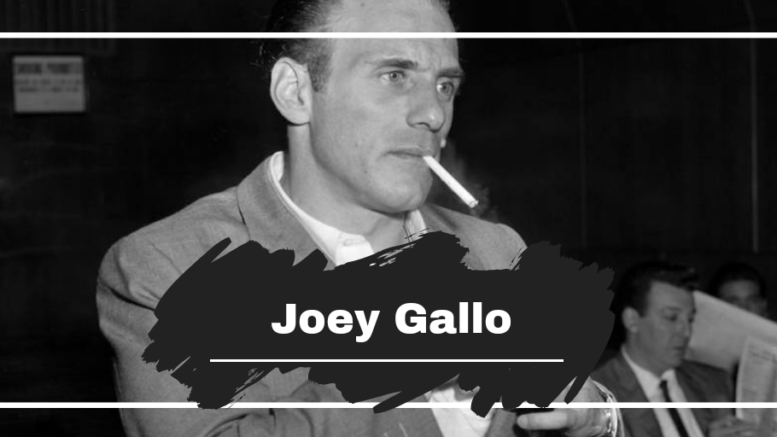 ÌJoey Gallo was born April 7, 1929, in the Red Hook section of Brooklyn, New York.  He was one of three sons to probation bootlegger Umberto Gallo, in due-course Joey and his two brothers Larry and Albert ‘Kid Blast’ Gallo became involved within the world of organized crime.

The man commonly known as ‘Crazy Joe’ and ‘Joe the Blonde’ due to his chest full of Blonde hair also had a softer side. He liked to write poetry and became known for befriending pop stars and poets. However, this self-promotion did not sit well with New York’s mafia leaders.

His weird behavior landed him in Kings County Hospital four years later. Picked up on burglary charges and ready to go to trial in a zoot suit a magistrate found Gallo incapable of understanding the charges against him and sent him to the psych ward for evaluation. As Joey Gallo spent his twenty-first birthday there, the psychiatrists declared him schizophrenic, by this time Gallo was already working as Hitman and enforcer with Joe Profaci, boss of the Profaci crime family later to be the Colombo family.

In 1957, the Gallo brothers were given the contract to take a hit on crime boss Albert Anastasia. Anastasia was one of the most feared bosses in the United States at that time, due to his violent temper and the numerous murders he had ordered or personally committed as one of the founders of Murder Inc.

The Gallos knew that if they messed up this hit they would not live to see a new year.

Anastasia entered Grasso’s Barber Shop at the Park Sheraton Hotel in Manhattan on October 25, 1957, not knowing that this would be his last time he entered the shop.

Two gunmen walked up to Anastasia and fired five shots in his head and chest. The blasts dropped the notorious mob boss to the floor where he died instantly. The assassins then disappeared amongst the scared crowd never to be identified in a court of law.

In 1961 Joe and his brothers had assembled a successful jukebox racketeering operation. It had originally been under the auspices of the Profaci the future Colombo mob family. But then the Gallos broke away, and when they did, they did so with a brazen disregard for territory already staked out by more established syndicates. The Profaci’s declared war on Joey and his crew, beginning most notably with Larry Gallo’s death.


The Streets Would Run Red With Blood

On April 7, 1972, at 4:30 a.m., Gallo and his family entered Umberto’s Clam House in Little Italy, Manhattan, to celebrate his 43rd birthday. Little did Gallo know it was to be his last supper, with his wife, sister, daughter, bodyguard and his bodyguards female companion.

When police squad cars arrived he was rushed to the nearest hospital where he died.

Gallo’s sister Carmella declared over his open coffin that “the streets are going to run red with blood, Joey!”