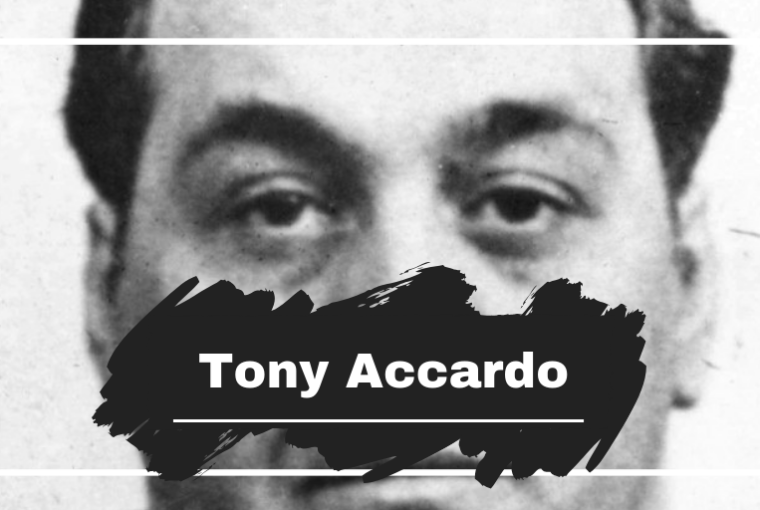 Antonino ‘Tony’ Accardo was born in Chicago on April 28, 1906. He grew up in Little Sicily on Chicago’s Northwest Side. As a teenager Accardo began his life of crime, he started out as a pickpocket and stole cars. He was arrested numerous times throughout his life but never spent a night in jail. While working as an enforcer for John Torrio’s gang he got his nickname “Joe Batters.” Because he hit people who wouldn’t pay in the head with a baseball bat.

His talents didn’t go unnoticed by Chicago’s most notorious crime boss either, soon enough becoming a member of Al Capone’s gang. One of Capone’s rules were simple; Stay loyal and don’t rat. Accardo lived up to this rule when rivals fired their guns at Capone, it was Accardo who pulled him down and shielded him with his body.

Accardo was immediately promoted to personal driver and bodyguard.

Accardo was accused of the 1929 St Valentine’s Day massacre, although law enforcement officials could never tie Accardo to the murders, he was seen in the lobby of Capone’s headquarters, the Lexington Hotel on Michigan Avenue, with a machine gun.

He was also tied to a hit on a former associate of Capone’s named Frankie Yale, who was gunned down in Brooklyn, New York, by machine-gun fire.

In 1943, another of Accardo’s close friends, Paul “the Waiter” Ricca, allegedly took control of the entire Capone crime family, and appointed Accardo as underboss.  Accardo encouraged Ricca to pull the organization away from racketeering and extortion due to the amount of other bosses going to jail, instead he moved the outfit into slot and vending machines, counterfeit cigarettes, illegal wire services, and global narcotics smuggling. His business decisions made the Chicago Syndicate millions in profits. Accardo allegedly took over as mob chief when Ricca retired in 1968, but even though federal wiretaps and other sources of intelligence stated otherwise, Accardo would always deny it, saying that he was never involved with the mob.

Before his death, Accardo divided his time between Palm Springs and an estate in the Chicago suburb of Barrington. He died May 22, 1992, of heart and lung disease, making him one of only a few mobsters who died of natural causes. Accardo was entombed in the mausoleum at Queen of Heaven Cemetery in the suburb of Hillside in Chicago, Illinois.

“His death marks the end of the Capone era, there’s nobody else left now.”

Vote For Your Favorite Mobster!