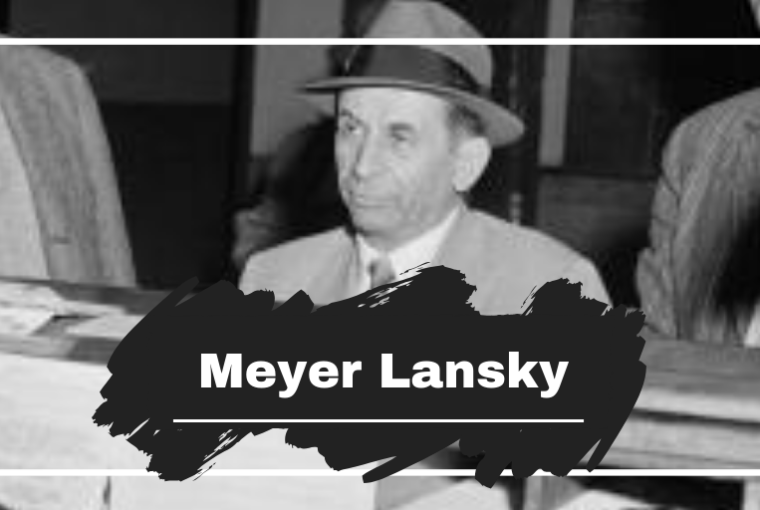 Born Maier Suchowljansky on July 4th 1902 in the city of Grodno, Poland. His family immigrated to the United States in 1911, and, after his parents allegedly couldn’t recall Suchowljansky’s birth date, he was assigned the birthday of July 4 from his immigration records. Suchowljansky’s name was eventually Americanized to Meyer Lansky.

Lansky grew up on Manhattan’s lower east side he had a hard life, often facing horrible violence as a child, yet this did not prevent his impressive mathematical abilities and confidence.

Soon he was setting up a street gambling business, and was mentored by Arnold Rothstein, it wasn’t long until Lansky met one of his first big Mafia connections, when he struck up a friendship with Benjamin Siegel, they created together the Bugs & Meyer Mob, their main aim was to hire men who they would assign to deal out murder and violence for other organizations.

With the prevention by law of the manufacture and sale of alcohol, in the US between 1920 and 1933, Lansky also ran a famous liquor bootlegging operation. Lucky Luciano was a fellow bootlegger as well, and Siegel would later acknowledge that Lansky and Luciano were in fact far closer in terms of their friendship.

Luciano and Lansky amongst other notable figures created a National crime syndicate linking together different mob factions, Lansky was considered to be the financial mastermind behind the system.

With the wealth he had earned from the bootlegging operations, Lansky maintained his gambling operations but wanted more, he opened several roadhouses across the US and eventually gained a strong position in Cuba, he opened up casinos there under the authority of Fulgencio Batista. Lansky would retain his holdings in the Caribbean nation until the ascent of Fidel Castro to power in 1959.

After World War Two, Lansky invested in real estate, including Siegel’s casino developments in Las Vegas, also he earned money for illegal and legitimate activities, in 1953 he was jailed, but only briefly for a gambling charge

In fear that he was going to be prosecuted, in 1970, Lansky sought retirement and immigrated to Israel, due to the fact that Israel grants citizenship to anyone that has Jewish heritage, however after two years he was deported back to the US due to his criminal record, his permanent residency of Israel was rejected.

In November 1972 after a three day flight, Lanksy returned back to America and as soon as he touched down in Miami, he was arrested though convicted of grand jury contempt charges, the decision was overturned and other charges were dropped because of his poor health he was suffering from a range of serious ailments upon the return of results from a medical examination.

John Dillinger: Born On This Day in 1903

Vote For Your Favorite Mob Films!