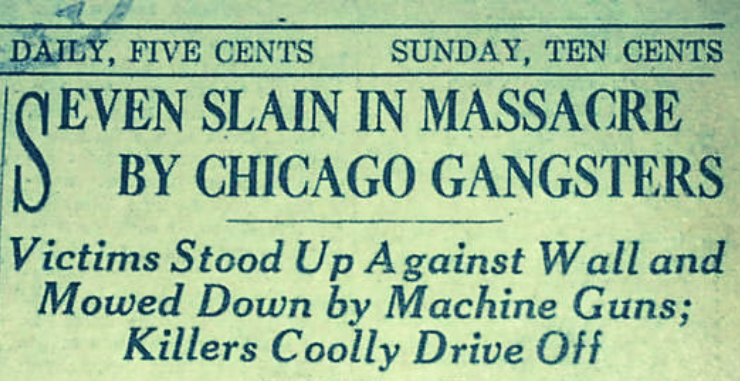 Today marks the 90th year anniversary of The St Valentine’s Day Massacre, which saw the slayings of seven members and associates of Chicago’s North Side Gang led by Bugs Moran. The men were gathered at a Lincoln Park garage on the morning of Valentine’s Day 1929, where they were made to line up against a wall before being shot by four unknown assailants carrying Shoguns and Tommy Guns.

It was a cold and chilly morning in Chicago, the time was 10:30. This day would not only mark one of the most brutal mob killings in history, but it would also end the North and South side battle for power. A battle that dominated the Chicago underworld for years and saw over 200 mob murders. Some of those victims included North Side leaders, Dean O’Banion and Hymie Weiss.

Five of the seven that were killed, were North Side mobsters. The Gusenberg’s were enforcers, Adam Heyer was the bookkeeper and business manager, James Clark was Moran’s second in command, and Albert Weinshank ran some operations for Moran.

John May was a young car mechanic for the North side gang, and Reinhart Schwimmer was an optician who was associated with the gang after giving up his practice.

A Full Guide To The 1929 Saint Valentine’s Day Massacre

The first two hitmen were dressed in police uniform while another 2 waited in the police car (following them in a short time after).

The first 2 hitmen lined up the 7 gang members up the wall with their backs turned. There was no fighting or running as this seemed to be just a police raid, there was nothing sinister about the situation. The men handed over their weapons, and then the final 2 hitmen entered the garage carrying a tommy gun each. By then it was too late…

The hitmen were believed to have been:

Joseph was the brother of Pasqualino Lolordo who was killed the month previous.

However, Jack McGurn, Frank Rio, Frank Frigenti, and even the up-and-coming Tony Accardo have all been suspected of taking part.

Read our full length guide to the events leading up to, during, and after the 1929 Saint Valentine’s Day Massacre.

Win One of Five Memberships In Our Giveaway